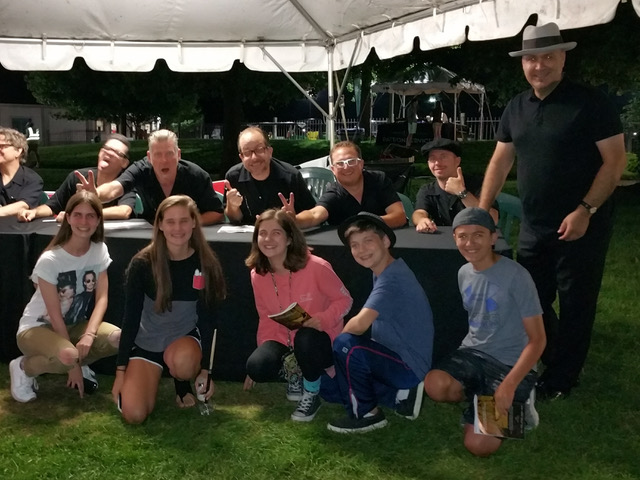 Among the many messages we receive, we occasionally have someone who writes us a very special letter detailing how what we do as a band, impacts them or their family.  We really appreciate it as sometimes, as we do our day to day travel and touring we get used to seeing only our side of the equation, our view from the stage.  And even with meet and greets we sometimes don’t really understand the depth of our fans appreciation, since we only get to interact with them for a minute or two at our signings.   Well, our fan Daryl, whom I’m assuming lives in Indiana came to our show last year in Fishers Indiana and wrote us this great letter that we felt would be perfect to share with y’all.

Our family went to the  Outdoor show on July 29th of last year in Indianapolis (Fishers,)  on the spur of the moment with some friends.  But the ‘why’ is important.  Just two days before, our family of four (our kids are… the girl in the middle in pink – Makayla, and the boy next to her in the all important fedora – Rylan) had just been joined by an exchange student from Hamburg Germany.  Sophie, far left in the white shirt in this picture, had just joined us two days before on what has been an 11-month stay.  And nope, we didn’t know her at all before she came.  This concert was our first real “family” activity together.  The other kids in the picture are friends… there were more friends who didn’t stay for the picture who also joined us that night.

Now, here’s the thing about this night.  I don’t know why, but this group of kids in the picture (plus the additional friends) decided, we are going to just have an absolute blast and we are going to show Sophie that we are a little crazy. But also they decided, we are going to pump up the band as well.  We are going to be so crazy, so loud, dancing so much, etc., that the band will be like… yea… this show is awesome… these people are crazy… let’s bring our best!  It is true.  The kids decided to give the band a pep!  🙂  And, that’s what they did.  They stood in the front row and just were… well… crazy.  Perhaps obnoxious.

I know the band wouldn’t remember this.  It was just another show.  But that night, the band definitely definitely noticed.  They were pointing, laughing, smiling… and then, when the kids stopped for this picture, the band members instantly recognized the group, told them jokes, laughed with them, and called them “fans of the night… fans of many many nights!”  But really… what happened was… it was a very first bonding experience with this teen from Germany, who now, 10 months later, is absolutely family to us.  It started at this show.

So… why am I sharing this story now?  Oh… how ironic life is sometimes.  I just noticed something today.  The band is back at the same venue for two nights… June 22nd and 23rd.  And, yes, in absolute truth, that is … yup, two days, once again, before Sophie, this precious gal from Germany, leaves us to head home.  2-days before, well, we have come to realize will be one of the worst days of our lives in our family.  The day we say goodbye to a new daughter and a new friend.  Funny how a girl from Germany can intersect your life and become so important.

And thus… when I saw the dates of the upcoming shows… I thought… I need to send the story.  Maybe it will make someone smile. Because, that night back in July, was so very special to us as a family.  And I wanted to say to the band… thanks for the memories that night.  It wasn’t just another night, just another concert for us.  It was the start of a very special experience over the past 11-months.

Oh… and Sophie got a drumstick that night, given directly to her.  She still has it in her room proudly.  It will make the trip to Germany soon.

Blessings to you and the rest of the BBVD family.  Keep having fun because you just never know.